Street Pastors is an inter-denominational Church response to urban problems, engaging with people on the streets to care, listen and dialogue. It was pioneered in London in January 2003 by Rev Les Isaac, Director of the Ascension Trust, and has seen some remarkable results, including significant reductions in crime in areas where teams have been working.

Southwark Street Pastors is overseen by the board of Southwark For Jesus and runs in partnership with Ascension Trust, the police, Southwark council and other statutory agencies.

To contact the Southwark branch of Street Pastors email Tim Dacosta at southwark@streetpastors.org.uk

Southwark Street Pastors were awarded the ‘Southwark Civic Award’ for the amazing work they have been doing on the streets of some of the the most anti-social areas in London. They recieved their award directly from the mayor of Southwark May 2009 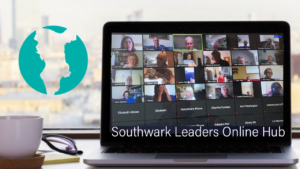 Our next Fellowship Prayer Breakfast is Thursday 16th 10.00am and we will be exploring what new things God is doing in Southwark. An opportunity to share new mission objectives, mobilise streams of united prayer and[...]
View Calendar